A blend of Dark Vanilla and Grullo

An Onoya (小野屋 杏 Onoya An) is a third-year student at Aoba High School, the school Arata Kaizaki attends after he becomes a teenager, and she is a transfer student like him as well.

However, she is in fact an employee of the ReLIFE Support Division and Ryō Yoake's junior supervisor in the ReLIFE experiment. She was actually going to be the support of Kaizaki, though this was changed. But she does become the real support of the other subject, Subject No. 001, Chizuru Hishiro, later on. 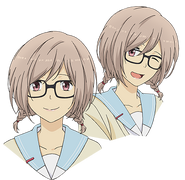 Onoya is a short and petite woman with warm beige hair and pinkish red eyes.

When attending Aoba High School or otherwise hanging out with students from Aoba High, she kepted a rather nerdy appearance to fit in with the school's academically-oriented reputation. She sports her hair in two braids tied with small red hair-elastics with several strands of hair framing her face. She wears a pair of rectangular glasses (prescription-less).

When she's not with regular students from Aoba High, Onoya removes the prescription-less glasses and wears her hair loose, her hair being wavy, mid-length and laid on her shoulders. At times she wears a pair of golden earrings and some makeup.

During her training at a different school in the 2012 academic year, she wore her uniform loose, and had long fingernails with nail polish. No glasses.

Onoya has a cheerful and bright personality who is often seen with a big smile on her face. Behind this cheerful front, she has a manipulative and cunning personality as seen when she tries to seduce Arata Kaizaki just to see how he would respond and pretending not to know Ryō Yoake, even though he is her senior at ReLIFE. She is very responsible and caring and genuinely cares for the subjects and watches over them.

An Onoya's first job was retail at an apparels store, recommending clothes to customers. She was having issues at work, but had nobody to talk to. She then came across the ReLIFE Laboratory's hotline service, a call center offering anonymous counselling service. She coded herself as A-san on the call, while her recipient was coded as Y-san. The counseling service offered by the ReLIFE hotline helped Onoya tremendously, and she resolved to quit her current job and join ReLIFE Laboratory to help other people, just like how she was saved. Expecting to become one of the people counseling people over the hotline, she was surprised to discover that the ReLIFE Laboratory is running experiments in secret.

Onoya worked in the Support Division of the Kantou Branch of ReLIFE Laboratory. For the 2012 academic year, she underwent ReLIFE training and attended a high school that has fairly casual rules. She was also responsible sifting through the list of test subject candidates for recommendation of the ReLIFE experiment in 2013, and by summer she already had Arata Kaizaki picked out as her top recommendation. At the end of the year she scouted out the convenient store where Kaizaki was working for direct observation, and she debated whether to put him in with third year students or second year students.

Although attending a different school, she also watched how her senior co-worker Ryō Yoake supported Test Subject 001, and the struggles Yoake was having. When Yoake seemed to be lost in self-doubt, Onoya scolded him and help him get his bearings back, culminating in Yoake proposing to extend the experiment of Test Subject 001 for an extra year.

Onoya's recommended candidate Kaizaki was approved to be Test Subject 002, and Yoake's proposal to extend Test Subject 001's experiment was also approved. However to both of their surprise, Subject 002 was assigned to Yoake, while Onoya was to take over Subject 001's support starting the second term. During the first term when Yoake had to handle both test subjects, Onoya was instructed to assist without revealing her identity. Onoya was quite visibly upset for not being able to take on Subject 002's case.

Due to the reassignment, Onoya had to trasfer to Aoba High School for the next academic year. Because Aoba High is a more academically focused school with stricter rules than the school Onoya went under training for, Yoake recommended her to change her appearances in order to avoid attracting attention. Thus Onoya put on degree-less eye glasses, braided her hair, and stopped putting on nail polish.

Despite not being assigned to support Test Subject 002, she still wanted his ReLIFE to succeed and wanted to be directly involved. On the first day of school, she tried to go for a klutz appeal during self-introductions by mentioning she already got lost once. She also proactively befriended Test Subject 002 as fellow transfer student buddies, even asking him to eat lunch together.

For the First-Day-Of-School test, she intentionally failed all three subjects, knowing Aoba High's level is too much for Subject 002 and fully expecting him to fail too. This would've given her excuse to spend time with Subject 002, studying together. And when a classmate, Kazuomi Ōga, offered to tutor Subject 002, she jumped at the opportunity to join in as well.

Her antics earned the ire of Ryō Yoake, who often sent her LIME messages reminding her to not get too close with the test subject. When her classmates noted that she is often seen messing with her phone, she used friends from her prior school as her cover story.

On May 4th, 2013 during the Golden Week break, she used study session as a cover to visit Subject 002's apartment with Ōga, testing how he covers his identity and such. After Ōga had to leave, leaving she and Subject 002 alone, she went as far as attempting to seduce Subject 002. While Subject 002 ultimately refused her advances, her actions crossed the line too much for Yoake such that he blew her cover right in front of Subject 002 (originally Subject 002 should never have found out Onoya is a ReLIFE). With her student cover blown, Onoya blabbered on regarding many details surrounding ReLIFE that risked exposing Yoake and her own involvement with Test Subject 001, though the critical parts were covered up with half-lies.

Her new cover in front of Subject 002 is that she is undergoing a second year of training, learning from Yoake's example. Afterwards, she passed all her tests with ease (no more studying with Subject 002), but still eats lunch in the same old group with Subject 002 and Ōga.

At the first glance, it seems she enjoys messing around with Yoake's work and to tease him at every opportunity. However, as her superior, she has great respect for him and she is always genuinely concerned about his well being when things go wrong. In addition to her constant teases, it is also hinted that she does have a bit of a crush on him as Yoake states that Arata was able to easily pat Chizuru's head before due to him regarding her as a kid, which reminded Onoya of when Yoake patted her head. The thought of Yoake regarding her as just kid therefore seems to bother her [1].

In Report 222.5 epilogue, she realises her feelings towards Yoake. Under the assumption that her feelings are not going to be taken seriously, she proceeds to tease him. Yoake then reveals that he was the Y-san and he knew that she was A-san all long. Yoake stated that he has been waiting for a year by now and confessing his feelings for her. Onoya was stunned by his confession, hoping that it was just one of his tease. Much to her surprise, Yoake confirms that he was serious and went in for a kiss. Yoake proceeds to invite Onoya back to his house to get all lovely-dovey.

Using her position as a member of Support Staff, she loves to tease Kaizaki regularly, specially when the other test subject is concerned. He is bothered by her presence most of the time. However, she's very worried about the effects the end of the experiment will have on him.

At the start of school year, she had minimal interaction with Hishiro. Hishiro constantly calls her "Braided-Glasses Girl" and is irritated at her being close to Kaizaki. It is later found out that she does this intentionally so that she can induce some jealousy in Hishiro. Afterwards, in the second term, she was introduced as the supervisor for Hishiro. Onoya wants Hishiro to successfully complete her ReLife but she is saddened by the effects of the end of the experiment on both Hishiro and Kaizaki.This is because she sees Hishiro having Kaizaki as a moral support and feels after losing her memories, she would go back to being anti-social as she was before her ReLife.

Onoya one year before the series start, wearing the uniform of her prior school.

Onoya before she joined ReLIFE laboratory, when she was still working retail.

Onoya is casted by Sae Okazaki in the movie