A blend of Quartz and Dark Gunmetal

Wintergreen Dream (with a slight tint of Powder Blue)

Arata Kaizaki (海崎 新太 Kaizaki Arata) is the protagonist of the story and an initial 27-year old jobless man. He had been unable to get employed anywhere since quitting his first company after only three months. His hopeless lifestyle took a turn when he was invited to become the Test Subject No. 002 in the Kanto Branch of the ReLIFE program under the watchful eye of Ryō Yoake to change his life for the better. With the help of a mysterious pill, his appearance was reverted to a 17-year old and he had to attend high school as a transfer student for one year. Throughout his life at the high school, due to experiencing youth again, he forms unforgettable bonds, learns to cope with his past and develops as a person. All of this gave back the self-confidence he had lost, so he was able to succeed his experiment and get his feet back in society again.

After his ReLIFE experiment ended, Kaizaki joined the ReLIFE Laboratory in the Support Division in order to help people just like he was helped.

Kaizaki is an adult man with an average build and height with broad shoulders and a defined facial structure. He has short, slightly spiky and messy dark blue hair with bangs framing his face, and sharp, aqua-blue eyes. His Post-ReLIFE appearance looks just the same. As an adult, he is often seen in a formal business suit consisting of a black jacket with a white collared shirt underneath and a black tie. He also wears a pair of black pants and a pair of black shoes. He is also seen to carry a black handbag quite often.

It is stated that even though Kaizaki may seem and speak selfishly sometimes, he is strongly kind and likes the act of helping and caring for everyone. Although he himself says that he prefers to stay in the shadows, he began interacting a lot with his surroundings and classmates after he became a teen, and helps them solve their problems. He is therefore said to be very mature, supportive and responsible (like an adult) but he can also be confronting depending on the situation. He always acts calmly and takes everything nicely and is understanding, but if something really bothers him, he will react in a straightforward, angry manner.

He has great social skills and easily makes friends. Even though he has a great and friendly personality as seen by many, this side of his is overshadowed by his adult, "neet" personality. Kaizaki didn't have much self-confidence and often wondered why his life had gotten to such a low point. But after becoming a teenager, experiencing youth again, Kaizaki changes and starts doing things he wouldn't before. This also had a positive impact once he went back to his original form. He has a strong sense of justice and honesty, which is one of his strongest points, but is also a major flaw that can be used against him.

He describes himself as persevering - someone who would stick to something until the end, once he has made up his mind. He likes to tease his friends, especially Kazuomi Ōga, in which he can sound like an old man according to the latter. He is highly supportive of his friends and helps them out in their relationships, and although he sees them as kids ten years younger than him, he cherishes and respects all of them greatly. Kaizaki sometimes wishes that he could grow up with his friends and talk about their high school lives once they became adults.

Once the ReLIFE experiment ended and Kaizaki went back to his original body, he decided to become a member of the support staff in the ReLIFE department. He did this so he could help others who are in the situation he was in, and give them the support he received when he was in the lowest point in his life. The experiment and support made him realize that life wasn't as dull as he once thought. He is shown to approach Takaomi Ōga, his future presumed subject, with a very energetic and straighforward manner, just like Yoake in the past.

Kazaki was born in the countryside where he grew up and lived there with his family his whole childhood. When he was in high school, he went on a class trip to Tokyo and since that moment, Kaizaki swore to move to Tokyo and go to university there. He was strongly fascinated by the "modern" Tokyo which contrasted with his life in the countryside. He also had his life planned out from the beginning. He planned to graduate, get a job, get married at 25 and start a family. None of this things came true, sadly.

Kaizaki used to work in a Black company that did a Flower Business under the leadership of Michiru Saiki (Kaizaki's senpai), whom he grew very close to. He was disappointed at the way the people in the company did their work wrongly and the way they blamed it on Michiru. Although she insisted she was fine, Kaizaki couldn't continue watching her get harassed by their male co-workers and tried to fight for her sake, which did not work as well as he planned. In the end, his senior committed suicide, an event which traumatized Kaizaki deeply. It was implied that her cause of death was either from hanging or strangulation. This would explain why Kaizaki refuses to tighten his ties and wears them in a loose unprofessional manner. He also holds his neck in a choking position whenever he has flashbacks about Saiki. Afterwards, he tried to justify her death and was baffled by the fact that the company was fairly ignorant to this matter. Kaizaki then subsequently quit his job out of disgust of the company, revealing that he would rather be jobless than working there. The president of the company also fired him and ordered him to never come back, three months after his employment.

The event became a black stain in his life, and since then, he became jobless and began working part-time at a convenience store. His senior's death, along with the small amount of money he earned in which he had to lie to his "friends" about having a steady job, made Kaizaki stop believing in himself. He was unable to be employed in other companies because of this past of quitting a company after three months. Kaizaki eventually turned into a NEET; his mother covered his living expenses until he was laid off.

Sometime between that time, Kaizaki was scouted by An Onoya who chose him for the ReLIFE Project. When Kaizaki got to the lowest point in his life, he met Ryō Yoake who offered him to take part of the ReLIFE experiment to change his life for the better. After hearing they would cover his expenses and even get him a job after the experiment, Kaizaki accepted the offer.

Kaizaki is 27-year-old man who is unemployed and forced to work odd jobs in order to get by due to his parents cutting him off. His life is changed when he met Ryō Yoake and was offered the chance to better his life. Yoake presented Kaizaki with a card that read ReLIFE which is an organization that helps people like him. He tells Kaizaki that he would put through an experiment that'll last a year and if he performs well he might be offered a job at the organization. Excited, Kaizaki takes up the opportunity as Yoake gives him a pill that would make him look like a 17-year-old.

Saiki is Kaizaki's superior at his previous job who was a victim of constant harassment by her colleagues, something that really bothered him. When Kaizaki tried to help her, the attacks became even worse and Saiki committed suicide. Kaizaki blamed himself for her death and lost faith in society and in his own worth, leading to the events depicted in the story.

Kaizaki becomes Hishiro's first friend where she thinks she's cute and he is impressed she's trying her best to overcome difficulties in her life, unlike him. She initially gave him a little sister vibe, but in the recent chapters he's realized that he's in love with her. However, he's unwilling to act, as he sees that playing around with the feelings of a young girl is unhealthy, as the memories will be erased at the end of a year. Kaizaki believes that is a very cruel and unethical thing to do. Currently, he supports her as they go through the year keeping his feelings intact. In chapter 197, he said "I love you Hishiro-san, I am completely in love with you".

In Chapter 221, they finally learn the other was a subject of ReLIFE and Kaizaki was shocked to discover she is older than him. After she briefly becomes sad at his possible disappointment, he assures her that he is happy with the revelation and hugs her which surprises but delights Hishiro. Kaizaki then confesses his feelings for her that he is truly in love with her and wishes to be with her forever, and asks her to go out on a date with him. She is very touched by this declaration and states if he is okay with her she'll go out with him on a date, as they smile at each other and share their first kiss. Kaizaki is later teased for his relationship with her by his fellows Ryō Yoake, An Onoya and others while Hishiro doesn't make it better by saying that they aren't married 'yet'.

Kariu lends Kaizaki a pencil on his first day of school and he goes out of his way to help mend her relationship with Honoka Tamarai and improve the relationship between her and Chizuru Hishiro. He also was responsible for Kazuomi Ōga realizing his feelings for Kariu where Kariu became more friendly with him on the course of the series although she still insults him due to his exam retakes.

Ōga was one of the few students to first interact with Kaizaki. Ōga helps Kaizaki prepare for his makeup tests after he fails them. Kaizaki is disappointed at the fact that Ōga is dense even though he is so handsome. Kaizaki makes him realize his love for Rena Kariu and is responsible for him confessing to her. After getting together with Kariu, Ōga had a difficult time deciding universities which led him to consider enrolling to a university outside Aoba which led to more misunderstanding to Kariu as he did not speak with her about his plans, there is also a tension within his home which sprouted from his parents' separation and his brother becoming a shut-in and a NEET. Ōga was able to recover his relationships with both Kariu and his brother and deciding to enter Aoba University instead of an outside university from the advice given by both Kaizaki and Chizuru Hishiro who came to his rescue.

Initially, Onoya introduced herself as a fellow transfer student to Kaizaki. Not only was she seated near Kaizaki, she also failed all her tests, so she and Kaizaki formed a study group with Kazuomi Ōga as the tutor and the three generally eat lunch together. She and Kaizaki often chat on the side with Oga's (lack of) relationship status a much-recurred topic.

After she was exposed as a ReLIFE employee in training, their relationship at school did not noticeably change much. The main notable difference is that now Kaizaki expects being under the surveillance of both Ryō Yoake and her, and sometimes she would send LIME messages to tease him, especially when he's alone with Chizuru Hishiro.

Kaizaki in the first chapter. 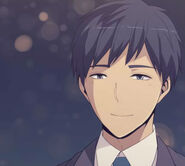 Kaizaki in the live-action movie, played by Taishi Nakagawa.