Honoka Tamarai ( ほのか, Tamarai Honoka) is a third-year high school student at Aoba High School who is in the same class as Arata Kaizaki. She is the captain of the girls' volleyball club.

Honoka is a teenage girl with a short and fairly slim build, though her body is very developed and seems to be more built up.

She has fairly droopy, aqua-colored eyes, and about chin-length hair, that is straight and brown. She wears her hair is bangs which cover her forehead, and she also keeps two blue pins in her hair.

She is an outwardly cheerful person that's very caring. She's also very clumsy. Inwardly she's thoughtful. She deeply cares about her friends, especially Rena Kariu. She's a character that's as readable as an open book. How she feels is clearly shown in the anime.

In second grade, Inukai was still a big crybaby. Because of that, Honoka always got into fights with boys in order to protect him. After an incident with a broken cup, Inukai made up his mind to be the "bad guy" so Honoka wouldn't get hurt anymore.

She always had fast reflexes, so she was very good at many different sports. Because of that, many people were jealous of her. She went to Aoba High School because it didn't have a very good volleyball team and because Inukai and Nobunaga were also going there. There, she met Rena. Kariu told her that she was her goal and accused Honoka of not trying her best. She made Honoka serve seriously but ended up getting hit in the face. Afterwards, the two became great friends.

They met each other because they both had to do make-up exams.

Honoka met her through Kariu.

Childhood friend of Honoka and Nobunaga

Childhood friend of Honoka and Akira who is hinted to have feelings for. 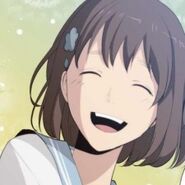 Add a photo to this gallery

Retrieved from "https://relife.fandom.com/wiki/Honoka_Tamarai?oldid=11650"
Community content is available under CC-BY-SA unless otherwise noted.