A blend of Light Khaki and Brown Yellow

Dim Gray (with a slight tint of Pastel Gray)

Kazuomi Ōga (大神 和臣 Ōga Kazuomi) is a third-year student at Aoba High School, and a close classmate of Arata Kaizaki after he became a teenager. He is very smart and always gets the highest score among the boys in his grade, which is why he is recurringly selected as the class representative. This, along with his appearance, contrasts with his poor athletic ability and denseness when it comes to romance. 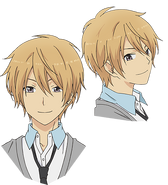 While attending Aoba High School, he wears his elder brother's uniform (white shirt, black tie, dark gray full trousers and a light gray full sleeve sweater), which happens to be too loose on him[1]. He has matching piercings with Rena Kariu in his left ear, which was done by Takaomi Ōga.[2] He has received compliments from An Onoya and Arata Kaizaki on having an attractive physique[3]. Arata has also called Kazuomi "good looking" multiple times [4][5].

Kazuomi is very focused on school who spends most of his time perfecting his grade to get into college. He's seen as being dense in the matters concerning love and relations as he did not know about Rena Kariu's feelings for him. He cares for his friends very much and often looks up to Arata Kaizaki for advice and Kazuomi also feels embarrassed after mentioning that he has a girlfriend as a way of boasting to Kaizaki.

Kazuomi greatly respects his older brother, who had previously shouldered the responsibilities of providing for the family. Even after Takaomi became a NEET, Kazuomi simply felt it is now his old turn to be responsible and let his brother time to rest. The piercing Kazuomi got from his brother was one of his greatest treasures, as a remembrance for when Takaomi was cheerfully working hard.

Ohga shares a warm relationship with Arata where he constantly helps Arata with the retry tests he has to take, even though he is irritated with the lack of progress. It is due to Kaizaki that Ohga realizes his feelings for Rena Kariu. Kazuomi is convinced that Arata is somewhat of a "womanizer".

Ohga has been close friends with Rena ever since their middle school. As he has a dense personality, he did not realize that Kariu loved him. Kaizaki makes him realize his feelings for her and he confesses to her during the Summer Festival, the two of them became a couple after a mutual confession from Rena.

In Vol.15 Chapter 225.5, they eventually got married (which now makes her Rena Ōga).