A blend of Ecru and Metallic Bronze

Gold (with a slight tint of Blond) 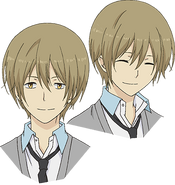 Ryō appearance is generally quite average, yet distinct. Both his 17-18 year old and 27-28 year old form have short dirty blond hair which is worn in no particular style and allowed to simply fall across his forehead in a distinctive fringe in the middle, with parts at either side, and sharp pale yellow eyes. Pre-ReLIFE, his build is more robust, with broad shoulders not unlike Arata Kaizaki, and a defined face. Post-ReLIFE, while his features remain the same, his build is significantly slimmer and his face is less defined.

Yoake takes his job as Arata Kaizaki's supporter very seriously, even to the point of intervening in his ReLIFE to help him develop throughout it positively, despite this being against the rules of the ReLIFE program. Yoake is haunted by a past failure involving the subject before Arata, Subject 001, and this affects his view of himself and his job significantly. However, it seems that by watching Arata's ReLIFE, he is healing from his past failures and trauma, much like Arata is healing from his own. Yoake enjoys teasing people, and Arata often refers to him as a sadist, a title which he has taken as a compliment in the past. Despite this, Yoake does in fact care a great deal about Arata, and wishes for him to recover from his past through a wonderful ReLIFE, such that he will overstep his boundaries as an observer to steer Arata in what he feels is the right direction.

When Yoake first joined the ReLIFE Laboratory, he worked at the call center division for one year, listening to various people's issues and counseling them. He later transferred to the Support Division. After attending Aoba High School for a year as training, he was assigned as the support for the first test subject of the Kantou branch.

Yoake met Chizuru Hishiro as she came out of a failed interview and informed her about the ReLIFE Project. He was expected to assist Hishiro improve her interpersonal skills. He was also suggested into entering into a romantic relationship with her in the end to make her experiment a success. He was then put in the same class as Hishiro in the second year in Aoba High School as he had completed his one year of training.

However, Hishiro made no effort to get to know the people in her class. Yoake was criticized of not lending enough support. He then tells Hishiro of the expectations and asks her to help out a bullied student in their class. This however made the bullying even worse due to Hishiro's clumsiness in handling the situation. The bullied student asked Hishiro not to interfere anymore and Hishiro totally avoided human contact. Yoake was then criticized for interfering too much with the experiment.

Month after month, there was no change in Hishiro's interpersonal relationships though she excelled in her studies. Yoake was continually criticized as either not providing enough support or interfering too much. Yoake felt the experiment only increased Hishiro's loneliness and tried to provide support,only to be rejected by her. He was continually pressured into bringing better results by his superiors with An Onoya being the only person who was supportive of him. After the latest meeting, Hishiro's ReLIFE was then considered a failure because there was no improvement.

Onoya then asks him to come with her to check out the new subjects. Onoya then praises him saying that Yoake is amazing as she would have gone crazy because of the tremendous work pressure. With all his work and mental strain taking a toll on him, he faints and falls down on Onoya. Onoya then chides him for giving up after one failure and it is unlike him to do so. He then meets Hishiro to inform that her experiment is a failure and apologizes for not properly providing support. He then asks Hishiro to continue one more year of her ReLIFE experiment until graduation, promising that he'll make it a success this time.

After Hishiro decides to continue her ReLIFE experiment, she changes her hair to look the part of a high school girl, which Yoake states suits her. The ReLIFE Lab then inform Ryō and Onoya that they have decided to let Hishiro continue her experiment as Subject:001. They select Arata Kaizaki as Subject:002 and ask Yoake to sign the contract with him. As for Onoya, they ask her to be the support staff for Hishiro. They inform that Hishiro and Kaizaki will be placed in the same class, allowing Kaizaki to influence her to gain self-confidence.

The ReLIFE lab also expects Kaizaki and Hishiro to be unaware that the other is a ReLIFE Experiment subject. They ask Yoake to continue as Hishiro's support for the first term and support Kaizaki as well. Onoya would be transferring to the same class and provide assistance to Ryō. She will then take over as Hishiro's support in the second term. After this, they confirm with Kento Amagase that the memories of each other (Kaizaki and Hishiro) will be erased once their experiments are completed. He then proceeds to meet Kaizaki to induct him into the ReLIFE experiment.

Yoake introduces himself to a drunken Arata Kaizaki on the street near his home as Kaizaki walks himself home from a night drinking and pretending to have a job with his friends. He informs Kaizaki that the ReLIFE program is interested in him, and wishes to recruit him as a subject. He tells him that ReLIFE will pay for all his expenses should he accept their offer for the duration of the experiment, and may set him up with a job if he does well following its conclusion.

Kaizaki wakes up the next morning, realizing to his shock that he took the ReLIFE drug, not thinking it through in his drunken state. Yoake arrives at his home to explain how his ReLIFE will go, then leaves him with his school supplies. Kaizaki arrives at school the next day, and is shocked to see Yoake is there as well as Yoake willfully neglected to mention the support also takes on the role of a student, because he wanted to witness Kaizaki's reaction.

Onoya is a co-worker of Yoake's at the ReLIFE company where they have a business superior-trainee relationship, and he constantly berates her for taking unnecessary and overly invasive actions regarding ReLIFE subjects, despite him occasionally doing to same, or even to a more significant level. Due to this, it can be hard to tell if they are friends or not, they speak comfortably around one another yet are always bickering and throwing insults. However, An has shown to care about Yoake's mental state, and actively concerned herself when he was depressed following the failure of Subject 001.

Yoake in the live action movie, played by Yudai Chiba.